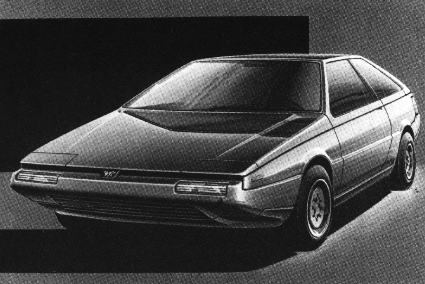 First there was the Isuzu 117 coupe, designed in 1966 by Giugiaro at Ghia and developed by Ital Styling, and mass produced from October 1968 onwards.

Then the Isuzu management decided to entrust Giugiaro with the design of this car's successor, giving him a completely free hand except for one condition, to use the platform of the Gemini 1800 (Japanese version of the American Chevrolet Chevette platform). The manufacturer would not interfere with the design development phase, but would wait to view the finished prototype to decide on mass production follow-ups.

The result was the Asso di Fiori. Here, through the complete faith placed in him by the manufacturer and his own internal need for a new approach to shapes having come into a head, Giugiaro unleashed his creativity. Italdesign's stand at the Geneva Motor Show was perennially swelling with people: journalists, designers, and manufacturers, all came to see what Giugiaro had "been up to" this time. And they weren't disappointed: the Asso di Fiori was his fifth "Copernican revolution", after the radiator grille with incorporated headlights (Alfa Romeo 2000 Sprint, 1960), bonded windows (Alfa Romeo Canguro 1964), built-in painted bumpers (Asso di Picche, 1973), and cut of the hatch wrapping onto the sides (Volkswagen Golf, 1974). 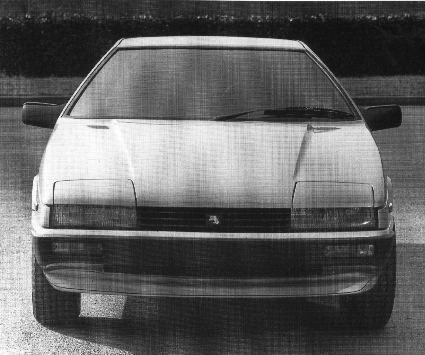 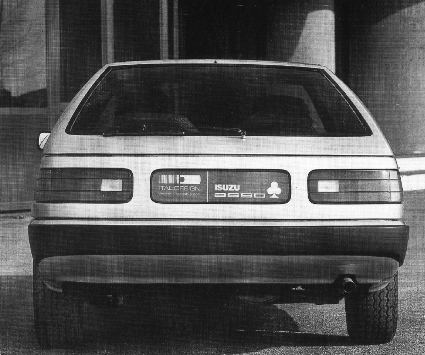 Exterior drip channels eliminated, all flush-fitting windows, and limousine doors and rear hatch are the three ideas that had already been glimpsed at individually both on his earlier prototypes and, partially, on other cars. What was extraordinary about them here was that they were all worked in together and were technically feasible. Montovani had believed at once in these radical choices of Giugiaro's and gave it his all to make them mass producible. Needless to say, the Isuzu management appreciated the car. They literally fell in love with it, and the Show prototype was flown directly to Japan. Within forty-eight hours, still at the Show, they were given the "OK" to go ahead with the car's development, entrusted to Montovani and his team of engineers, and were asked to speed up the times to the max.

Talking about the Piazza (as it was to be dubbed in mass production) to the Italdesign engineers means rekindling a nightmare. Urged by Montovani and by the Japanese who out of their enormous respect for Giugiaro, requested that every modification be approved in writing, even the substitution of the diameter of the washer or the movement of a switch on the seat, they ran non-stop for almost two years.

Nevertheless, this effort would bear its fruits: at the Geneva Motor Show of 1981, exactly 24 months from the Asso di Fiori prototype, Italdesign showed the first pre-production model of the Piazza. Regular production was to get off the ground two months later, in May. In recent history, these times practically set a record.

What this "Copernican revolution" says in shape deserves thorough analysis, both of Giugiaro's motivations and of the influence it was to have on mass production cars, so vast and far-reaching it may even surpass that of the Golf. Considering 146 cars built from 1981 onwards cited in the 1987 catalog of Revue Automobile, something of a "Bible" in the car world, it turns out that 48, equal to 33 per cent, use flush doors like the Asso di Fiori and, of these 48, only 9 came from Giugiaro's pen. The Turin designer's approach to this new period in shape grew from the combination of aerodynamic demands, that called for flowing surfaces and smooth connections, and his need for a strict simplicity in graphic touches. 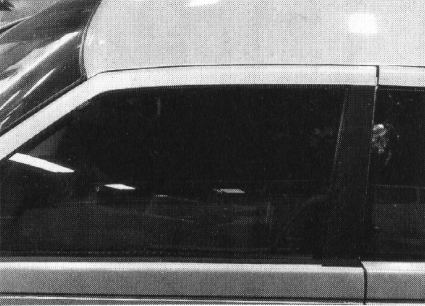 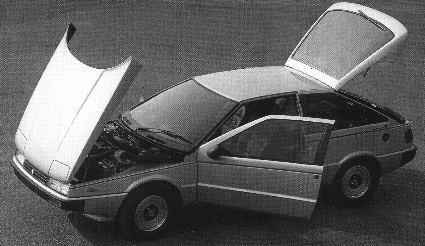 The outside drip channels, source of considerable aerodynamic turbulence especially around the A-pillar, were eliminated and substituted by a gutter built into the door rabbet strip. An ingenious solution, easy to imagine theoretically, but that requires arduous design and testing to make effective.

Freed from the protuberance of the drip channel, the roof became a clean surface. The strip (also a gutter) had to be lodged on the connection between roof and side along the entire length of the door cut, as well as being ideally extended onto the A-pillar. This led Giugiaro to design a door where the sheet metal wraps round and covers the B-pillar and roof/side connection, thus giving rise to integral (otherwise referred to as wrapping or limousine) doors. The same treatment was given to the hatch, which covers the C-pillar, bending around the glass of the second back window. Here too, a guttering strip. As far as shape is concerned, Giugiaro came to this choice through the need to simplify the graphic breakdown of the form. Up to then, A-pillars had been characterized by six elements: Windshield seal, A-pillar, drip channel, door cut, door frame, side window seal. If the windows called for the addition of trim strips, the number then grew to eight. With limousine doors, it was visually reduced to three: windshield strip, A-pillar, which is part of the door (the door cut disappears from view because the door frame "knocks" directly against the rubber of the strip), and the side window strip.

Giugiaro's need for severe geometrical forms led him also to "hide" the other two necessary cuts on the car: those of the engine hood and hatch. 80mm beneath the belt-line, the designer drew a slight groove, painted red, that wraps totally around the car. The cut to the engine hood (that folds over onto the side) and that of the far end of the hatch "fall" into this groove and drop from sight. The result is a car boasting an impeccably clean shape. In the side view, the B-pillar creates a continuous glazed surface area that, thanks to the highly elongated back side window, gives decided rake and freshness to the whole.

The very penetrating front end proposes an unusual lighting feature: fixed headlights, faired by movable lid so that the lights can be flashed during the day without having to move the lid or fit out the car with additional lights. The lids and related motor are built onto the hood. 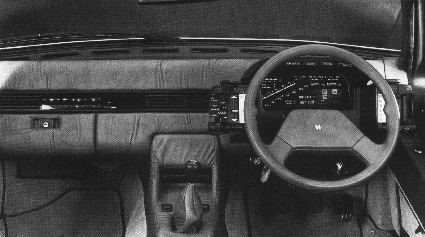 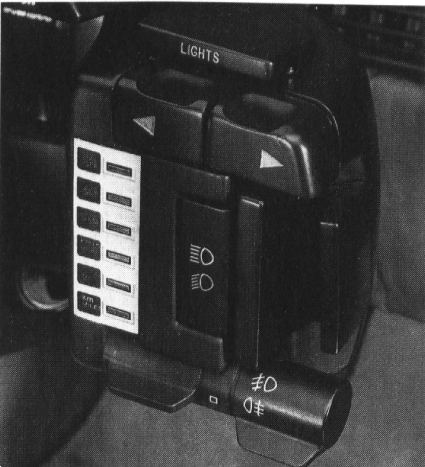 Standing out in the rather classically laid out interior is the steering wheel-instrumentation unit, quite a courageous move. The aim was to enable the driver to operate all the controls by keeping a thumb grip on the wheel and moving just the other fingers like on a piano keyboard. The controls housed on the two satellites that pivot on a vertical axis and may be adjusted to each particular drivers build. The steering wheel is fitted with two thumb rests on the inside of the rim, which make for a safer grip and a relaxing support during long journeys. 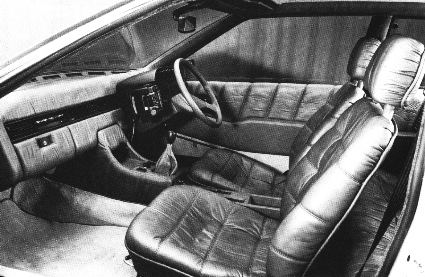