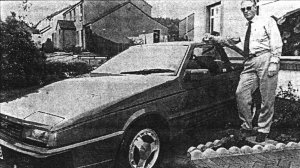 Inverkip motorist Alex Johnstone has picked up a show award for his unusual and rare car.
Alex (42), of Primrose Crescent, won best car at a show in Northampton, England, for his Isuzu Piazza Turbo.
He only joined the Isuzu Piazza Turbo Owners Club a few months ago after finding out it existed through a car magazine.
It was at the club's first appearance at the Japanese Extravaganza Billing that Alex picked up his gong.
"There must have been around 250 cars and 17 Piazzas but the Toyota Enthusiasts Club picked mine as their favorite," he said.
"I was very surprised, shocked in fact, because it was the first time I had been to anything like that."
The Piazza was designed by Giugiaro in 1979 and was known as the Ace of Clubs.
Alex has owned his 127 mph, two-litre, Lotus-tuned car for four and a half years.
"My other car is a Maestro and that is a real heap of rubish," Alex joked.
"The two cars are like chalk and cheese but I like to keep the Isuzu for special trips and for pleasurable driving.
"It is the best car I have ever driven."
The Piazza was originally designed as a concept car but ended up in production.
"It generates such interest because there are only around 1,200 left in Britain," Alex said.
"They are expensive to keep but a real labor of love."