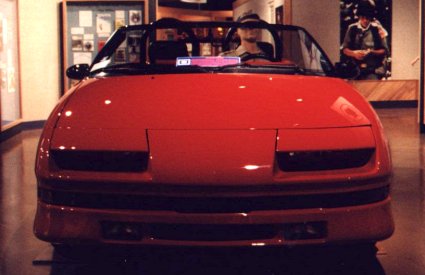 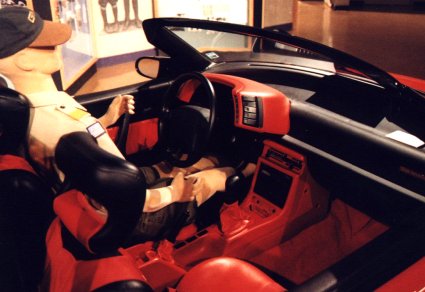 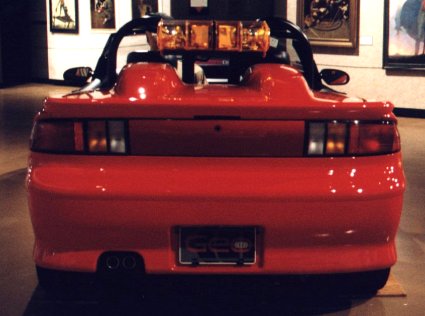 Adapted from the display information:

This 1991 Geo Storm Roadster was built in the 1991-92 school year by Explorer Post 1870 by 30 students who were enrolled in a joint program between the Boy Scouts/Explorer Scouts of America and the GM Tech Center in Warren, Michigan. The students were given the opportunity to transform a standard Geo Storm Coupe into "their own dream machine".

Technical support was given to the students by Chevrolet-Pontiac-GM of Canada (CPC) and the United Auto Workers Local 160. The project was supervised by Tom Ellis, GM Technical Center and Exploring Coordinator. The Explorers worked with engineers and skilled trades people through this hands on project which provided direct experience in all areas of automobile design and construction, including drafting, machine shop, and metal fabrication. Design drawings were based on the student's concepts and were created by Denny Hall, Chief Engineer and Assistant Group Manager for Geo Group; Wes Yokum and Jon Moss of Chevrolet-Geo Special Vehicles; and Lief Chapman, Ron Smith, and Mark Beuregard of the GM Design Center.

Features of the vehicle include:

The Storm Roadster served as official pace car for two Geo Storm Celebrity Races which were held at the SCCA Trans Am race in DesMoines, Iowa on July 13, 1991 and the CART race in Denver, Colorado on August 24, 1991.

The vehicle has been featured in several magazines, including Motor Trend and Sport Compact Car.

The Storm Roadster was displayed at the GM Powertrain Lobby at the GM Technical Center in Warren, Michigan. It is currently on display at the National Scouting Museum in Murray, Kentucky.

Ownership of the Storm Roadster is still officially held by General Motors. The vehicle is on loan to the Boy Scouts of America. The Storm Roadster has never been title or registered. As a project vehicle, it is classified as "scrap" and can not be purchased, sold, or used on public roads, and must be destroyed (crushed) after its display use has concluded.

I would like to thank the staff of the National Scouting Museum for allowing me to photograph this fine vehicle. Without their help and cooperation, this would not have happenned.
I highly recommend a visit to the National Scouting Museum to anyone who is interested in this vehicle. It is a very impressive piece of work, especially considering that it was built by high school aged students. This, and its awards are a testament to the hard work and perserverence of Explorer Post 1870.
Flash Photography is prohibitted inside the Museum to prevent damage to the paintings. You will note in the background of several of the images there are a number of noted Norman Rockwell paintings on display.
I was not allowed to touch or open the hood of the Storm Roadster, and there was no mention of engine or suspension modifications having been done to the vehicle. It is unclear if the Explorers' work included a mechanical aspect.
As part of the display, behind the wheel of the vehicle is a manequin dressed in a Boy Scout uniform and GM cap.