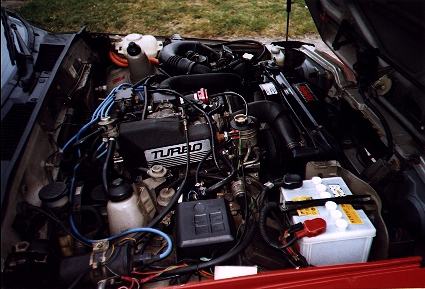 Turning Japanese; I Really Think So!

There's a world of difference between what the Czech idea of a car and the Japanese. The Czechs gave us the basic Scoda, while the Japanese gave us space ship type things, packed with everything but the kitchen sink. Look at the Piazza, for example, introduced in October '85. It weighed-in with Italian styling by Giugiaro to challenge the Alfa GTV, a turbocharged engine, rear wheel drive to take on the 2.8i Capri and a specification list that rivalled even the Toyota Supra.

So who can blame Jon Kingdon for chopping in his modified, and no doubt much loved Skoda, for a Piazza. Yes, an Escort Turbo would have been the obvious choice, but Jon wasn't after the obvious - he wanted something different.

Jon picked up his exceptional condition E-reg Mk2 for 2000 British Pounds at the end of last year. For that he got 150bhp, power steering, an adjustable steering wheel, electric windows, cruise control, central locking, air conditioning with a pre-set temperature mode, sports seats with lumbar support...need we go on? Basically, you'd have to be talking a fully loaded Merc to match one of these on the gizmo stakes.

Having played around with his Scoda for so long, Jon was naturally keen to heap the same level of attention on his Piazza, but unfortunately the price of owning a rare car is that aftermarket parts are also rare. When it came to stopping power, Jon had to make due with venting some standard discs, while the rest of the braking system was simply reconditioned. The suspension on Mk2 Piazzas was, believe it or not, designed by Lotus, but that doesn't mean there's not room for improvement. Not surprisingly, the cost of having stiffer springs made the move hard to justify at the moment, so Jon replaced the worn shox and springs with brand new items.

Happier times were had whilst searching for power. After scanning through Fast Car, Jon eventually spotted an advert for Superchips. The ad promised a power increase to 185bhp so he decided to give them a call. The power gain is achieved by raising the boost from the standard 8psi to 12psi by fitting an overboost pressure switch in conjunction with a wastegate actuator from a Saab. Jon was impressed with the conversion, especially the improvement in mid range power, but the most noticable difference came from swapping the exhaust. Jon kept the standard manifold and mated it to a 3" bore pipe, housing two Jetex silencers and he recons it transformed the cars performance.

Despite its Italian styling, the Piazza has benefited enormously from the addition of 14" 100+ Rimtechs. The Lotus suspension setup has limited the size of the wheels Jon can use, but he has managed to disguise the wheel arch gap by fitting 195/60 Falken rubber.

The Piazza also came to Jon in a rather boring shade of silver - not exactly the exciting image he wanted to display - so it was sent to Grove Car Body Repairs where Nathan and Donald treated it to a few coats of Ferrari Red. Finally, a graduated tint was added tot he windows.

Unfortunately, when it came to testing Jon's Piazza, it suffered a blown head gasket. It's now sitting in Segbury Motors, and Isuzu garage, awaiting a little TLC to its bottom end.