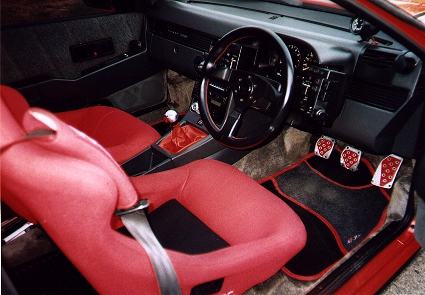 Who says we're not reaching the world with our fact-packed, riveting rag? Jon Kingdon in England sent us these photos of his '88 Isuzu Piazza MK2 (Impulse for us yanks). We get a lot of letters and E-mail from Impulse owners asking us why we don't feature more (any). Maybe if we were presented with examples as clean as Jon's, we'd do it. So come on, Impulse fanatics, put your money where your mouths are. Let's see you top this one.

Jon's Piazza has a 2.0L, turbo, intercooled engine that he claims is good for a 0-60 mph run of less than 6.9 seconds and claims a top speed of more than 135 mph. The standard horsepower rating (according to Jon) is 150. Thanks in part to a Super Chip [Reboost Kit], Splitfire plugs, a Jetex 3-inch exhaust system, and a K&N filter, the horsepower ante has risen to 196 at 12 pounds of boost. He says the boost can be raised to produce 220 hp, but he doesn't want to destroy the engine again. Jon resprayed the Piazza with Ferrari red and dressed up the interior with Corbeau seats, a Momo wheel, a bevy of gauges, and red Razo pedals. It looks way cool, Jon, but the steering wheel's on the wrong side. What's up with that?